What is it with all the awesome Brit sci-fi? I’ve been a fan of Doctor Who for a long time (started watching reruns on PBS as a kid and stuck with it from the 3rd to 5th Doctors). Sure, Who is cheesy, but that was its charm. The robots looked like guys in old refrigerator boxes and every alien planet looked like the English countryside. The stories and characters were cool, so the rest just worked. Douglas Adams was (still is) a huge influence on me, so I watched the Hitchhiker’s Guide to the Galaxy TV show. That was cheesy in much the same way as Who, but it worked. Red Dwarf is cool. There are others, but they’re all cheesy and charming.

Then, a few years ago I see the “new” Doctor Who on Sci-Fi Channel. I was skeptical. Looked like the effects were better, but that would take away the cheesy charm, wouldn’t it? The effects were better, but there was still that cheesy aftertaste we all loved and it worked! My wife watched it and became a fan and she won’t even give the old show a chance. Ok. Doctor Who worked, but that’s the BBC’s baby and they took good care of it. Then, along comes Torchwood. 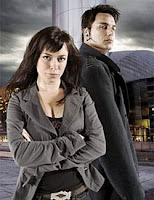 Torchwood is a spin-off of Who with a decidedly more adult flavor. Lots of naughtiness, but still sci-fi. It was different than Who, but still felt like it was in the same place. Even though I’d prefer a bit more guy-girl naughtiness, the show still works. In fact, it’s excellent! It’s the only show I’ve ever seen that is consistently different from episode to episode, but doesn’t lose its overall feel. Ok, BBC. You’re 2 for 2.

There’s the Sarah Jane Adventures, but that looks like it’s geared toward kids. To be honest, it seems ok, but I’ve never really given it a chance. From what little I’ve seen, it seems decent.

Last night, BBC America launched Primeval. I thought it looked like a monster show (which, of course, I want to see), but it took a definite sci-fi turn. It wasn’t quite what I was expecting, but it was really good! I mean, DAMN! Three for three?? You’re making us look bad, BBC! I’ve got my hopes up for Fringe and the new season of Heroes, but these BBC shows usually leave me smiling, shaking my head, and wondering why the hell I wasted time watching anything else. Ok, so that’s a little extreme, but these shows are just great on so many levels. Some episodes are better than others and there are a few things I could tweak here and there, but that’s just staring up close at a picture because it looks so good and you’re just trying to find fault SOMEwhere. 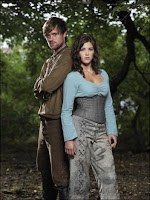 I’m also a sucker for the ladies in these shows. Are American women hot? No doubt about it. The women in the BBC shows just seem more real. Gwen on Torchwood has that hot little space between her teeth. Rose Tyler is an awesome blonde, but she looks like someone you could actually spot out in the world. Plus, don’t forget about Robin Hood! Another BBC show. It’s got a fantasy, swashbuckling feel to it while still being everything we want from Robin Hood. Plus, Maid Marion wears this great green dress that shows off curves that REAL WOMEN have. What a concept! Maybe I’m just sick of the typical stick figures that are rattling around, whining on nearly every American show. I’m a fan of brunettes, but if I see another skinny, doe-eyed, big lipped teen pouting on an ad for a CW show, I’m gonna punch someone.

Wow. I started off just wanting to talk about what a nice surprise Primeval was and it turns into this. Oh well. Check it out. Check out all these shows. I just noticed that they do like the "one has arms crossed and other stands with them hanging at sides" pose for their pictures, but they still look cool. Hopefully we Yanks can get some good stuff out there when the new season gets rollin’.
Posted by Marcus at 1:08 PM