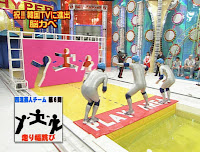 Ok, so new stuff is coming out on TV and I’m actually starting to get a little pumped. As freaking awesome as Hole in the Wall might be (if you haven’t seen it, you’re missing out. Weirdoes in disturbingly form-fitting jumpsuits jump through shapes in a foam wall. Classic), it’s about time for some actual plotlines. Heroes looks like it could be pretty good, but that’s a little ways off. Sanctuary on the Sci-Fi Channel looks like it will have some promise. Torchwood will be returning. You know my thoughts on Primeval (awesome). The one I’ve seen most recently is Fringe.

Please Lord, let there be Fringe. I’ve heard the numbers for the pilot weren’t great, but the show sure as hell was! Even the lettering that marked where they were at the beginning of the s

cene was cool. It’s hard to explain, but if you’ve seen the show you know what I mean. The writing was great, the characters were original (a crazy guy who actually acts like a real crazy guy instead of some Looney Tunes character. SWEET), and there were even a few twists and turns that took me by surprise. Even the ones that weren’t a surprise were nicely done. It’s out there, but not quite X-Files out there. It’s right on the. . .oh. . .Fringe. Huh. Well Played, JJ Abrams.

Chuck’s also coming back and I really enjoy that show. Let’s see. . .I’ll give Knight Rider another try and I think that’s about it. I just hope Fringe gets its fair shot and is picked up for a full season. Maybe people just DVR’d it and watched it later like I did. Would that affect the numbers? I don’t know. Just keep your fingers crossed.
Posted by Marcus at 12:54 PM