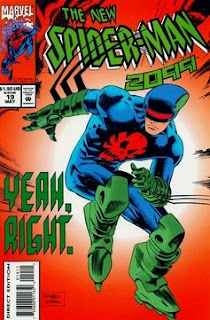 A friend of mine has a blog about comic books and when he digs into his back issues to read something that may be crap, he calls it Dumpster Diving. Well, I became very familiar with this phrase when I dug into some back issues of my own. Namely, a few issues of Spider-Man 2099 and a mini series called Blood Legacy.

According to the good folks at Marvel (and they are mostly good, if not great), about 90 years from now, we will traverse cyberspace on Rollerblades while wearing clunky VR helmets. Did I say Rollerblades? YES. F'ing Rollerblades. 'Nuff said.

Then I read the Blood Legacy series. It was only 4 issues and kept promising some big twist to pay off my time and $12 spent getting through it. Well, comic books also promise that I can see through ladies' clothes with x-ray specs or build an army of Sea Monkeys to forge my underwater empire. I think I just made an "I am really old" slip there with the Sea Monkeys reference. Anyway, none of those promises panned out. All I got was a bunch of vampires who swore they weren't vampires, but insisted on giving themselves away by drinking blood and living forever. My only payoff with either of these comics was a real good look at why I probably stopped reading comics for a while.

Speaking of feeling like an old man, I caught some of the MTV Movie Awards. Let's just say I was genuinely surprised that they didn't give Ben Stiller's Comedic Achievement award to Rob Pattinson. Megan's a Twilight fan, so I tried to keep my mouth shut. And even though she would tell you I didn't keep very quiet, she should know I did hold back quite a bit because yes, I realize I'm not the audience for Twilight. At least Heath Ledger's Joker won for Best Villain. If a sparkly vampire won that one, I would have had to write a terse letter to MTV. See, THAT'S how us old guys throw down!!
Posted by Marcus at 11:28 AM