I have returned from St. Louis and boy are my arms tired! That joke really doesn't work for road trips, does it? Archon was great. I'm amazed at just how well organized that convention is. Although I'm sure there were snags somewhere in there, everything seemed to go without a hitch from my angle. Not only did the organizers remember I was supposed to be there, but they gave me a ribbon for my name tag that says, "PRO". After having been to so many cons (heh...pro...con....those jokes just happen. I'm that funny) it was cool to move up in the world enough to get a special ribbon. Cheap thrill? Sure, but seeing my name on a t-shirt blew my freaking mind! And it was even spelled correctly!! Right on the shoulder so I can point it out to the people behind me at the post office. There I am, in the list of guests (PRO guests) for that year's festivities. I've been writing for over 10 years, but this is a first. I'll take my proud moments whenever they come my way.

My panels went really well and were well attended. Except for the one about Vampires with a Curfew. I never figured out what that panel was supposed to be about and neither did any of the other panelists. Can't really blame most people for picking another place to be on a Friday night, but the folks that did show up got some pretty decent conversation about writing and genre stuff. Good times. The werewolf panel was (appropriately enough) a wild one. When we did stay on track, we debated the finer points of werewolfery, argued scientific merit of lycanthropy, and damned Kid Rock to hell for ripping off those bars from Werewolves of London. Plus, Captain America and Hawkeye were in the audience, so how could you go wrong? Ahhh, cons.

Saturday was my time to be a fan for the most part. I did have my signing, which turned out to be a high point. There weren't a ton of people there with books (since the dealer's room didn't stock any...grrrrr), but the people who showed up were great. Here's a shout out to Michael! Thanks for stopping by. You truly made my week.

The panel with Laurel Hamilton went pretty well. She was nice and the audience actually seemed interested in hearing me talk. Well, most of them did. Even though I lost a few when I admitted to not being a fan of steamy human-on-werewolf action, the ones who stuck with me were patient and made me feel welcome. Here's a shout out to those ladies in the front corner to my left. Sorry I didn't catch your names. 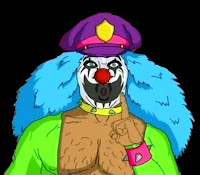 So after all that shouting, Megan and I got home safely. Waiting for us in the mail was that free copy of Guitar Hero: Van Halen I ordered after getting GH 5. You've seen the commercials. 2 for the price of 1. I'll believe it when I see it. Well, I see it. What do you know? People are actually following up with their promises lately! Nice. Now if I can just find the code to dress up David Lee Roth as Rockso the Rock 'n Roll Clown from Metalocalypse I'll be giddy.
Posted by Marcus at 11:12 PM