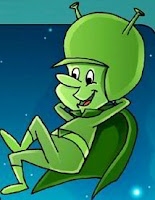 Yesterday was a big day for game releases. Actually, Tuesday is always a mini-event because new games as well as new DVDs are released so it tickles me on a few of my sweet spots. That sounds more than a little nasty, but you get what I'm saying. Nothing hit as far as DVDs that I wanted, but there were games coming out the wazoo!! And by that, I don't mean this guy. He's The Great Gazoo. I don't want anything that comes out of him. 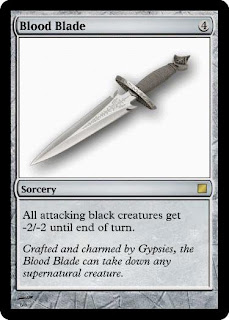 Anyway, I was trying to decide if I should break down and buy a new game and, if so, which one. In the middle of that process, I checked my Facebook page and found a little somethin' that a reader whipped up. It's a Magic: The Gathering card featuring the Blood Blade! How freaking cool is this? Just the sight of it made my geeky heart skip a beat. Even stranger is the fact that I actually have this knife. Bought it at a con because I thought it looked like a Blood Blade. Coincidence? I think not. Actually, probably is a coincidence, but still a cool one. Thanks, Michael!


On the video game front, Alan Wake, Split Second, new Prince of Persia, and Red Dead Redemption were some of the releases that had caught my eye. I intended on getting Red Dead simply because someone FINALLY made a high quality open-world western game. The only thing that stayed my hand was the fact that I'm in the middle of some open-world goodness now (Infamous, Fallout 3, GTA 4 -- I know these have been out for a while, but I'm slow!!) and would like to wrap up at least one of them before diving into another. Alan Wake is about a horror writer who fights monsters, so that was a no-brainer. Plus, I think I can find a way to use that as a tax write-off. Research? While I was in Best Buy, the girl in the blue shirt wandering the aisles told me they had the Split Second demo set up on one of their plasma screens. I checked it out, fell in love with the idea of blowing up buildings while racing and dodging debris, and picked that one up too. Damn you, Best Buy Temptress!!!
Posted by Marcus at 11:31 AM