The end is nigh. Well, at least the end of this draft of Skinners #5. I should finish up with it in a few days and then I can take a much-needed (albeit short) rest before starting in on the NEXT draft. Whew. What really bit me in the ass with this one was the whole "Keep writing until it's finished" mentality for the first draft. That's a good thing because I want it to be a great story and not just one that fits within a certain page count. I originally typed that last bit as "paige count". Heh. See what all of this editing has done to me? Anyway, the first draft wound up being 691 pages. YOWZA! I've cut a significant amount already, saved some for Book 6 and just sent some into story heaven.


I've been on a cartoon binge lately. I think that's got a lot to do with my brain being fried after so many long days of work and me not having any gray matter left w

hen I do get to step away from the computer. Also, I just like cartoons. It's been a lot of 90's stuff like Tiny Toons, Animaniacs, and X-Men. Plus some 80's goodness like Thundercats, He-Man, etc. Throw in some Spongebob and I also found some Tom & Jerry collections for super cheap at WalMart! Funny thing about that. It's hard to find a lot of classic cartoon shorts like Loony Tunes and Tom & Jerry on TV anymore. Plus, they seem to be cut up and edited to shit, so why bother when I do find them? The thing with Tom & Jerry was that Tom's owner in a lot of those classic toons was this big 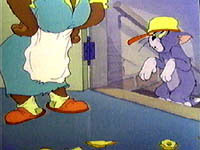 lady who was voiced as some horrible, outdated, and just all-around crude racial stereotype that seems like something from the pre-Civil War days. I know these cartoons are old, but yeeesh! So I pop in my new Tom & Jerry dvd and the first thing on the screen is a disclaimer that basically says, "We know about the racial stuff. Sorry about that. These shorts are from another era. They were wrong then, wrong now, but nothing worth rioting about. Just relax, and enjoy seeing a mouse smack a cat in the face with a frying pan." If you can't laugh at that, you're just beyond hope.


So it's back to work for me. There was something else I wanted to discuss with you guys, but we'll get to that next time. Gotta leave 'em wanting more! Eh, don't get too excited. It's nothing that great.
Posted by Marcus at 1:01 PM