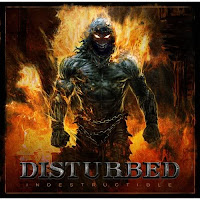 Is it sappy that I get sentimental about sending a manuscript off? Yes. How about nervous? Eh, maybe a little. Anxious. That's more like it. Today I head out to the post office and mail the manuscript for Skinners #5. Going back to another blog post where I talked about music accompanying each book, I'd have to pick another Disturbed song for this one. Check out Indestructible. Especially this part: "Indestructible. Determination that is incorruptible. From the other side, a terror to behold. Annihilation will be unavoidable. Every broken enemy will know that their opponent had to be invincible. Take a last look around while you're alive. I'm an indestructible master of war!" How can you not think of monsters kicking ass when you hear that? Great stuff. Speaking of Disturbed, the new album is out and I'm lovin' it.

This has been a rough week. Mostly, that's from putting the finishing touches on this book. Now this one isn't exactly finished, but the hardest part is over. There's a few more editing rounds to come. At least now this story is a finished product in my mind. So many times throughout the process, I think I'm ruining my own product, screwing up my career, or am just lost in the world I've made up. At this stage of the game, there's a definite relief. Of COURSE that's how Book 5 ends! So now it feels good to take a few days off and then jump into Book 6. Actually, I'm already primed for that one.

I think I'll play some games and catch up on some DVDs I need to watch. Downloading the demo for the new Guitar Hero as I type this. I'll finally FINALLY be able to dive back into some more Red Dead Redemption. I actually just started in on Borderlands. See how behind I am?? Plenty of new XBox Arcade titles to dig in to as well. Have you played Shank yet?? Pure Awesome! I want to see The Losers and Book of Eli.

Ok, so that's it for now. Just so you know, I've started sending out bookmarks and stuff as rewards for my plea for online reviews of Skinners. Haven't forgotten, so write those reviews, send me the links and I'll send you some free stuff. The Shimmy's passes are almost done and those will be going out soon. Get 'em while you can!
Posted by Marcus at 11:50 AM