There are lots of reasons for me to chew my nails lately. Skinners 4 will be hitting store shelves in a few weeks, Skinners 5 is with my editor getting its first once-over, and I'm hard at work on Skinners 6. That's a whole lot of Skinners! Also, I'm putting together a few other projects that I've been excited about for a while now. All this AND the Jonah Hex movie hits DVD this week! Ok, so maybe that last one isn't really a nail-biter, but it looks like a fun flick and I do want to see it.

It's a slow, trudging weekend here. Remember my great mood during the last post when I got a little taste of autumn? Well that lasted for about a day before the temps hit the upper 80's again. According to the weather gadget on my phone, it should be in the 70's this week and those weather predictions are never wrong, right? Yeah. Sure. Oh well. Keeping my fingers crossed anyway.

The new Medal of Honor comes out this week. They're taking the Modern Warfare route and doing...well...modern warfare. Looks really good. There's been a bit of a commotion since multiplayer battles are to be between US and Taliban forces. That means players get to play as the Taliban and shoot US guys. First of all, it's just a game. Secondly, hasn't this already been done in other games? Pretty much any modern military shooter with multiplayer has SOME side shooting at the US. This just seems like one of those little bouts of ruffled feathers that comes along with plenty of games regarding violence, language or any other sort of non-issue that's clearly marked on the package of said game beneath the big "M for Mature" rating on the cover. My view on this topic? See the first point. Just a game. No actual soldiers were harmed in the single or multi-player arenas. Plus it was already mostly solved by calling the Taliban "opposing forces" in multiplayer. Does having those guys shooting US troops make it all better? Who cares. Next.

Gearing up for World Fantasy at the end of the month. My first big con, so I'm excited. The deal is that any guest (apart from the Guests of Honor) get to do one panel or reading and one o 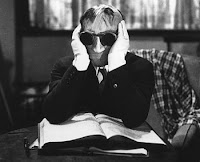 nly. Makes sense, since it's such a big convention. A few months ago, I got an email asking which of the panels I'd like to be on. I responded and waited to get the schedule. Last week, I get another email asking which panel I'd like to be on and did I get the first email? I respond again, saying I'm sure my first email was accidentally spammed or overlooked. No biggie. I'm fully expecting to show up at the convention without being on any panels because they never got my responses. All too often, I get to experience the crappy parts of being invisible without any of the perks. In other words, nobody knows I'm there unless I try to walk into the women's locker room at the gym. Should be a fun convention whether I get to be on a panel or not. Hope to see some of you there!
Posted by Marcus at 1:12 PM