It’s here!
It’s been a long time coming, but my first direct-to-ebook original is finally here!!
These last several months have been tough for me for a great many reasons. Output has been slow and distractions have been at an all-time high. Because of that, this book has taken me a lot longer than I thought it would. And the longer it took, the longer it seemed it was going to take before it was finally done. I was going to update the blog more, but there’s already been too many “it’s almost here” sort of posts and I know you guys were sick of hearing it. At least, I was sick of writing it. Well…no more! 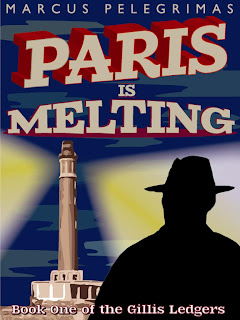 The book is called is Melting, first in a series called The Gillis Ledgers. Here’s the rundown…

1935
The Great War has been over for eight years, but shockwaves from that global conflict can still be felt. Airships roar in the skies. Converted DeSotos glide on elevated bi-rails. Cities are filled with suspicious characters like mad scientists and robots controlled by shady foreign spies.

Doesn’t sound like the 1935 you’ve heard of?
Welcome to the world of Jake Gillis.

Jake was a Marine in The Great War when things took a turn for the weird. Mines clattered to life and burrowed underground. Tanks began to hover. Robotic infantrymen charged into gunfire without twitching. After being reassigned to the Navy’s Special Sciences Division, Jake got a front row seat as the world was introduced to a dimensional gateway known as the Altersphere. Once the Altersphere was breached, things from alien worlds and futuristic societies found their way to Earth. Scientists rolled up their sleeves and figured out how to use what they could, dismantling the rest to give birth to a new reality.

Now, Jake works as a private contractor in the burg of where his skills are still in high demand. An especially nasty trinket from the Altersphere has burnt a trail across . Special Sciences is working off the books on this one. They need someone to follow the path of destruction back to its source. While Jake is always a sucker for serving his country, the big-time payday offered by the G-Men cinches the deal and he answers the call to duty.

….Sounds cool, right? I’ve been working on this project in some form or another for the better part of a year. Basically, I took an idea for an alternate reality, set it in one of my favorite time periods so I could include gangsters, G-men, spies and private eyes and mixed it with a dash of Indiana Jones for flavor. Pretty much a pulp adventure goulash of my favorite things. I won’t go into my whole ebook plan again, but I will stress that it is something I’m very committed to and will be using that format to publish many more projects. Including Skinners, naturally! When will the next Skinners be coming out? I’ll start working on it very soon.

Part of my plan is a new website which will be launching within the week. It’s a gathering spot for me and a couple other like-minded authors who are leaping into the ebook ocean. I’ll be maintaining this blog of course, but will also give a link to the new site when it’s ready. It won’t be long, I promise.
It feels like I’ve been ranting about striking out on my own for a while and now that it’s here, it feels really good. When I put this book onto Amazon.com, I thought, “Wow, that was easy.” Then I remembered all the writing, editing, fixing, thinking, revising, and other stuff that’s been keeping me up at night for so long. In the words of Han Solo… “Easy? You call that easy?”

I truly hope you guys take is Melting out for a spin. It’s funny, retro science fiction chock full of thrills, spills and shootouts. All the stuff that made me want to be a writer in the first place. It may have been tough getting this far, but this book was a joy to write. I did my best to make sure that joy shines through in every page. For now, it’s out on Kindle and Nook. Here are the links. If you don’t have an ebook reader, there are free apps for tablet computers, smart phones, desktops, laptops, and robotic personal assistants. Ok, so they don’t have the robot butlers yet but they SHOULD! If you like the book, tell a friend. And if you don’t like it….maybe lie to a lesser-liked acquaintance so they’ll buy a copy. Click here to check it out on Amazon. (B&N link coming soon) It’s only $2.99, for cripe’s sake!