EVP vs "really hearing something" 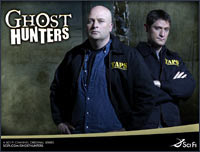 If you understand the title of this post, then you probably also know the Ghost Hunters season premier was on last night and it was AWESOME! I love that show. And with the schedule still reeling from the writer’s strike, it was even more gratifying to have a new show (which doesn’t rely too much on writers, by the way because it’s all real!) Yeah, I said it was all real. Sure, sometimes I’m sure they goose up the tension with well placed music or sharp camera angles, but I’m a believer and I think most of those recordings and videos are on the level.

Are they all ghosts or demons or whatever? Probably some are and some aren’t. Does the show make up anything for ratings? I honestly don’t think they have to. I could go into a whole shpiel about paranormal theories (and maybe some other time I should. It would be more interesting than talking about my ancient MP3 player kicking the bucket), but suffice it to say there’s enough going on out there to provide some good TV.

That show is great and so is Destination Truth, where they go out and try to find actual living weirdness like Bigfoot and Chubacabra. Now, that show takes itself just seriously enough to get the job done, but they freely admit when they’re probably just out talking to crazy locals and examining perfectly normal droppings as opposed to the supernatural scat of a Yeti.

Who needs writers!?! Oh, wait. Scratch that last part. Just watch these shows and enjoy.
Posted by Marcus at 12:02 PM