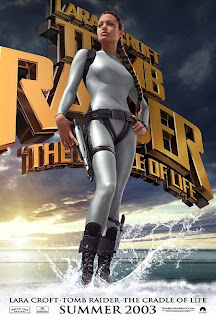 How do you know when you’re working too hard and your brain is getting crispy around the edges? When you take a break to watch “Lara Croft: Tomb Raider – The Cradle of Life” and keep trying to look for cohesive motivation with the characters and plausible continuity that strings one major event logically into the other. Yeah…I used “logically” when talking about a Lara Croft movie. What the hell??

At the time this is written, the first Skinner book isn’t even out and won’t be out for some time. That being said, I’m still working on tons of different projects (non-Skinner at the moment) and have been writing without much of a rest for two straight weeks. Is it torture? Not hardly. Does it wear on me sometimes? Only enough to mar my enjoyment of Angelina Jolie running around in tight outfits and shooting the living hell out of everything and everyone.

Well…it marred it a little, anyway.

I found myself sitting there, watching her discuss some mystical glass ball thing and how to unlock its secrets, wondering, “Now why is she mad at these guys again?” “Why does that other guy want that glass ornament thing?” “What’s thug #5’s reason for taking that job and how come he didn’t spot some super-hot woman in spandex climbing along the roof?”

The stuff I like isn’t high literature for the most part. I enjoy many different shades of crap and appreciate it for what it is, in all its differing flavors of crappiness. (Not as gross as it sounds). Hell, the stuff I write isn’t even high literature. It’s all stuff that’s meant to be fun and entertaining. There’s plenty of serious, life altering stuff going on in the real world without someone making more of it up. Lara just needs to be enjoyed for what she is: a cool chick in tight clothes wielding big guns (pun fully intended). That’s what a lot of stuff is and should be enjoyed as such.

My name is Marcus