My wife is out of town over Memorial Day weekend, leaving me to my own devices for a few days. Should I hit a few strip bars? Maybe take on a road trip? Nothing so exciting for me. I couldn't go with her because I need to work on editing a ghostwriting project while also putting stuff together for a new series proposal. Of course, I'm sprinkling a healthy dose of gaming in between work stuff.

I've recently re-discovered Call of Duty 4. I got it when it first came out, played through some of the single player campaign and was blown away by it. I played some multiplayer, but was blown away pretty quickly there too. . .by snipers who had me scoped out the second I took more than two steps in any direction. Well, stuff happens and I got distracted and it fell to the wayside. I finally got back into it and now I can't stop. I'm not that great at it, but it's still fun to watch my many deaths on the Kill Cam. So far, my favorite is when I get caught in an air strike. Seeing that bomb drop with my name on it is always good for a laugh. 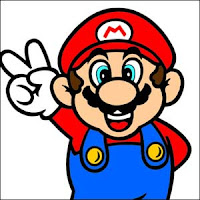 Also, Dr. Mario FINALLY came out on Wii Ware. Puzzle games are especially addictive for me and I've been waiting for this one since I first signed on to the the Wii Shopping channel. Say what you want about the Wii or casual gaming in general, but seeing my Mii doing stuff from dropping pills on dancing viruses to driving a go Kart against Luigi and some bubble dude is just cool. Ok, so maybe "cool" isn't the word I'm looking for, but it's fun. Seeing my little virtual guy perform a trampoline routine in Mario Olympics still cracks my wife up. I'm tellin' ya...cheap thrills. That's the key to happiness.

On the work front, I just sent off a proposal and sample pages to my agent for a new series. There's plenty of uncertainty in writing as a career, but sending new stuff off is exciting. It could snag me a million dollar contract. It could turn into nothing. Maybe it'll be a modest sale or maybe it'll set me up for life. Maybe it's an idea that I'll look back at and cringe in a year or two. I think it's a solid idea and the pages turned out really well, but that's only a part of the process. There's also timing, catching the right editor in the right mood as well as a little dumb luck. I'll keep my fingers crossed.

Then again, maybe I should uncross them. I'd probably die a lot less in Call of Duty that way.
Posted by Marcus at 12:47 PM