Sweetness is a virtue and you lost your virtue long ago 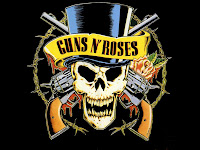 According to the most recent rumors, the new Guns n’ Roses album will be coming out next month. Technically, this is official, but after this long it's well past the "I'll believe it when I see it" stage. I’ve been a fan of GnR since Appetite for Destruction and still say Axl Rose is one of the ultimate rock stars of all time. No, I didn’t say he was the best singer or performer. Best Rock Star. Well, one of them anyway. The difference is all in the attitude. Rock stars aren’t easy to work with and they’re not worried about hitting perfect pitch. They strut on stage, kick ass in the shows where they stay upright and don’t give a rat’s ass what anyone has to say about any of it. Axl started a riot, which gives him HUGE rock star points. Guns had edge before “edge” became a catchphrase.

The new album is coming and it’s been in the works for over a decade. Of course, this is in between arguments with band members, drunken binges, public spectacles and the occasional performance. Rock stars, remember? You want punctuality and civil obedience, call U2. Eh, I don’t want to get into a high school debate about whose band rocks hardest. I just really hope Chinese Democracy has some cool songs on it. The trick will be to somehow listen to it without thinking about all the buildup. NOTHING can stand up to the tagline, “Over a decade in the making”. That just begs people to sit back, cross their arms and grunt, “Ok. This had better be good.”

I heard Shackler’s Revenge, which was a new GnR tune on Rock Band 2 and I like it. The guitar riffs kick my ass on expert setting, but that's not the band's fault. The song itself was better than a chunk of the new Metallica CD, but not as awesome as classic tracks from Appetite. I heard the title track on the band's website and thought it sounded pretty cool. I’m no big music critic. I just listen to stuff. Way back in my younger days, I would have happily fought about stupid crap like this until foam came from my mouth and sweat rolled through my flowing, rock ‘n roll length hair. Now, I just want to hear some more good GnR songs. Maybe the new CD will be great. I really hope it is. No matter what, I’m sure Axl will screech the hell out of his music to the best of his ability and flip plenty of shit to anyone who doesn’t care for it. See? Rock star.
Posted by Marcus at 1:04 PM