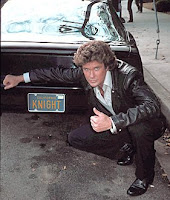 I finally got around to watching the series premier of Knight Rider. Now, I enjoy crappy shows strictly for their crappiness. They can be fun. Then, some can be. . .the new Knight Rider. I mean, this is the sort of thing that just defies criticism. It's like the writers were halfway into it at the start of the show and gave up midway through. After half an hour of showing KITT go faster than two or three hundred mph, they need to spend another ten minutes on a chase scene where that same miracle of technology can't catch up to some regular sports car.

Ugh. Even stuff that should have been cool simply wasn't. I mean, why did KITT need to transform into a truck so often?? And why did he need to transform the little cobra design from "reclining cobra" to "STRIKING cobra"??? OOOOO, NOW you're in attack mode!
Posted by Marcus at 3:14 PM