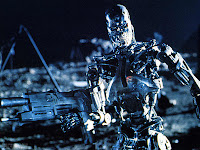 I caved in to the summer movie bug again. It happened when I was on my weekly sojourn to the comic book shop (It was a very good week by the way. I needed that to make up for the slow one a few back.) when I thought about Terminator Salvation. I knew there would be some midnight showings and figured I might as well turn my day into a full-on Nerd Fest. So I bought my comics, wrote my monster hunter pages, played some Gears of War 2 co-op, and headed out to the theater for some Skynet goodness.

Turns out those wacky robots are at it again! They just never stop trying to hunt us down and kill us. Super computer becomes self-aware, robots are designed that look like freaking awesome metal skeletons, they’re sent out to face the human resistance, wackiness ensues. This time, we finally get the movie all Terminator fans have been wanting. Well, sort of. Every Terminator flick has those cool flashbacks with the real war between humans and an army of robots shooting phased plasma rifles (in a 40 Watt range) at each other. And every time, I wished they would just make THAT movie. Salvation isn’t quite there because it’s set a little before the invention of plasma rifles, but it’s still pretty flippin’ sweet.

I especially like the way it’s filmed in a gritty, down and dirty style that makes the machines seem all steely and sharp and imposing and stuff. Seriously, it makes for a less flashy version than the shiny bots and glowing gunfire from those flashbacks in earlier movies. These robots really seem like killing machines put together by other machines to kill and hunt (not necessarily in that order) and not look pretty while doing it. The action was great and the effects were solid. I’m always happy to see movies where the director tries to make as many physical effects as possible as opposed to constant CG. I’d have to say my favorite aspect of the movie was the constant tribute paid to fans. There are all kinds of little bits and moments that nod back to previous installments. As a fan, I smirked at those and thought things like, “So THAT’S why Sarah taught him how to do that.” I don’t want to ruin any of those for you, so I’ll leave it at that. Oh, and there’s one part that was especially cool if you make sure to watch that first scene from T2 (the flashback opening) before hitting the theater. Nuff said.

As with any genre movie with time travel involved (didn’t I just say this for Star Trek? Huh) a few leaps in faith / rationality are required but that’s part of the fun. One strange criticism was that I was somehow expecting more Terminators. Is that crazy? All in all, this one is great summer movie stuff. I liked it a lot, but I still liked Star Trek a little more.
Oh, and someone won American Idol. I think it was that guy with the voice and...never mind. Obviously, I was busy.
Posted by Marcus at 12:46 PM