The 7th of July

So I'm a little late with my patriotic tidings, but happy 4th everyone! Mine wasn't too spectacular just because I was working. It was pretty much like any other weekend except with more explosions. Since our grill was confiscated by the porch police (one guy sets his mini fence on fire in our complex so we ALL have to start obeying fire safety laws), Megan cooked up some burgers. Actually, they were better than what I would have grilled since she cooks 'em with the cheese on the inside!! It's the little things that make life so grand. Also, we learned that the dog is a litt 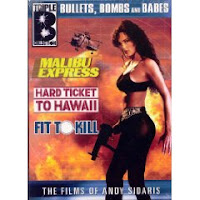 le skittish when it comes to fireworks. Watching the pup scramble at the sound of every bottle rocket in between editing Skinners 3 made for an interesting weekend. And, by "interesting", I mean "only slightly better than the 3rd of July".

No complaints, though. Draft 3 is almost done and then it's off to Draft 4. Should I come up with cooler names for those? How about "Draft ALPHA, BETA and OMEGA". That makes it sound like a military campaign or one of those Andy Sidaris movies. Yeah!!!
Posted by Marcus at 12:18 PM