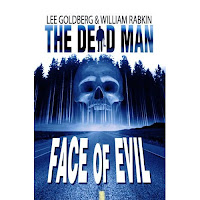 Remember all those times I've been talking about doing ebooks? Well it turns out I'm not the first one to come up with this idea! Heh. Obviously there are plenty of ebooks out there, just like there are plenty of real books on the shelves. The trick is to find the ones that are any good. A friend of mine (Matthew Mayo who was also in that D&D related interview I was in) told me about a new series called The Dead Man. Right away, the title caught my interest. I like dead things. Also...skull on the cover. Ok, I'm easy.

Seriously, though, I appreciated the story behind the story. Turns out that the creators, Lee Goldberg and William Rabkin, had a great idea for a kick-ass supernatural TV series but couldn't get any of the network suits to give it a go. I can definitely relate. After so many years, they decided to just do the stories themselves as short, kick-ass ebooks. I checked out the first one soon after I got my Kindle and fell in love with the concept of a hero brought back from the dead and pursued by a demonic nemesis as well as the format of shorter action-packed stories along the lines of a monthly adventure series. Here's a link so you can see it for yourselves.

The reason I bring this up is twofold. First of all, I believe ebooks can help writers get stuff out there that wouldn't normally get a chance. The only drawback is that a lot of crap will surface as well so you need to know where to spend your dough. For what it's worth to any of you, I recommend The Dead Man. It's cool, full of violent goodness and (most importantly) FUN. Also, the first book in the series, Face of Evil, is currently only 99 cents on Amazon.com. The second reason I'm bringing it up is because I got in touch with Lee and will be writing one of the upcoming Dead Man books! My friend Matt Mayo will as well, so keep your eyes on the series in the months to come. The second book, Ring of Knives by James Daniels, just came out. I'll be working on mine this summer and it will be released soon after. Ok....commercial over.

In the last several months, ebooks have reminded me why it's fun to be a reader. They hearken back to the pulp days where stories were out there because they were entertaining, new and fresh. There's a place for the big publishers, but there should also be a place for the fun stuff. Pulp has its place. Without it, there'd be no Conan, Tarzan, hard boiled PIs, or treasure hunting adventurers. You know....the candy aisle of the bookstores. It doesn't all have to be drama or romance. Readers have always known this. Unfortunately, publishers are always looking for a sure thing before they commit to any project. There is no sure thing. This is something writers have always known. By its nature, our job is a gamble and putting out our own projects in a forum as widespread and accessible as ebooks allows us to place a few bets.

As I scroll through the ebook store on my Kindle, I'm finding stuff that I can't find on the shelves. It's the kind of material I wanted to write when I'd scribbled my first story. Even though Skinners is definitely something I've always wanted to write, there are SO many other projects that haven't seen the light of day because they weren't close enough to some other trend or just didn't hit the right editor on the right day. The idea of being able to get those other projects out there to be read really gets my blood racing. Are ebooks the way it's all headed? Are they just a prolonged novelty? I don't know. Right now they've hit a powerful stride and if good writers keep putting out good stuff, I'm all for it.
Posted by Marcus at 12:13 AM