I couldn't be more excited about going to the World Horror Convention at the end of the month! I've been writing horror for years and loving horror my entire life, but have never been to a WHC. I intended on going to the one in the UK last year, but that fell through. This year it's ON! Everyone connected to the con has been great. Earlier, I got an email asking for panel ideas because they wanted to do something other than the normal vampire and zombie stuff. I drew a blank at the time and apparently I wasn't the only one because I'm going to be on the Vampire MEGA-Panel!! There's also going to be a Zombie Mega-Panel. I thought that was funny, but hey. It's a horror con. Vampires and zombies are all over the place. Might as well talk about 'em. There's going to be a ton of other stuff and the programming looks fantastic. My only problem is that my panel is at 1o:00 Saturday MORNING. UGH!!!! Rest assured, I will be there, chock full 'o caffeine and ready to panel it up. 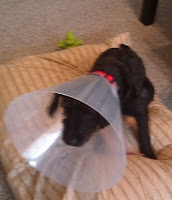 Just getting to Austin will be fun because I'm road tripping there. Normally, that would be cheaper than flying but with gas prices what they are I'm not so sure. Then again, you can't put a price on crowded airports, intrusive searches, cramped quarters, aching eardrums,

parking problems....ok. The price is too much and I'm happy to drive instead.

My new dog Mallory will not be driving with me. That kind of stinks, but she'll be in good hands. Speaking of my Schnoolde Sidekick, today she's going to the vet to get her stitches out from her spaying which also means the Cone of Shame will be removed! Yay. Look at her up there. So droopy. So demoralized. But things weren't always so bad. Her cone also acted as a crude parabolic dish to enhance the sound while watching amazing 80's movies! Check out the third picture for a look at how she made a valiant escape attempt while also wreaking glorious revenge on my blinds. Oy.