Legendary...hopefully lives up to its name 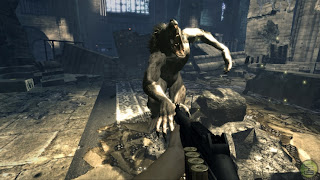 Have any of you seen ads for this new game called Legendary: The Box? It’s for the 360 and PS3 and it’s about someone in modern times opening Pandora’s Box to unleash a bunch of legendary (not just a catchy name) creatures onto urban streets. Sounds freaking awesome! Also, it may sound a little familiar to anyone who reads SKINNER (or will read when it comes out).

The simple fact is that every story has, in some form or another, already been told. Every genre from horror to legal drama is filled with stories that, when boiled down to their basic premise, has already been written, put on film or probably scribbled on parchment a long time ago. The difference is in what each different telling brings to the mix. Just because there are other vampire books out there, should there be no more vampire books in the future? Just because some game sounds like some books, does that take anything away from either one? Not at all! Does similarity mean someone is ripping off someone else? If it did, the lawsuits would have kept most pouplar fiction from seeing the light of day.

The only reason I get into this is because stuff like this inevitably comes up when discussing different properties within a genre. Also, it just popped into my head while writing this. Modern werewolves? Just like SKINNER!! Modern vampires?? Just like Anne Rice or any of the rest! Eh, forget that crap. My advice is to try not to compare everything to everything else. It’ll only distract you from some good entertainment.

Back to this game…I can’t wait to play it. I hope it’s good, because there haven’t been a lot of games like this that really deliver. I don’t see why, either. There are billions of zombie games and trillions of military shooters out there. Why not more vampire and werewolf stuff? And don’t bring up games like Vampire Rain! I’ll keep my fingers crossed because this looks freaking COOL!
Posted by Marcus at 3:54 PM