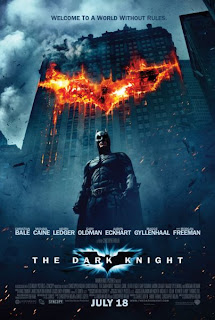 Finally, FINALLY, The Dark Knight has arrived! I didn't get midnight tickets, but I went to see it on opening day. All I can say is...YOWZA! For years, like many other comic book geeks, I've been bitching about how the Joker is portrayed in movies or TV. Sure, Jack Nicholson was cool, but that's not how the Joker really is. Sure, Batman the Animated Series was great, but the REAL Joker couldn't be shown on a cartoon meant for kids.

I've been listening to all the hype and watching all the stuff on the web and was quickly convinced that this Joker would be different. Nolan's Batman Begins was breathtaking and he showed he truly could pull off a vision of the Joker as dark as it was meant to be. Everything I heard about Heath Ledger made it seem like he was doing everything absolutely RIGHT.

I have seen The Dark Knight...and it is good.

Let me rephrase that. It was fucking awesome! So good that I had to curse. I won't even get into the tragedy surrounding Heath Ledger or all the Oscar talk. I went to see a kick-ass movie with a diabolical, truly scary Joker and that's what I got. Heath Ledger NAILED IT! When the Joker laughs at something, it's twisted and not even close to funny. That's how this is played. The Joker is crazy, not amusing. That's how this is played. The Joker was spectacular.

Christian Bale was fantastic. There's not as much Bruce Wayne in here this time around, but it all feels right. Bruce and Batman truly are two different people in the same shell. Michael Caine wasn't around as much as before, but he's great. Gary Oldman maintains his spot-on portrayal of Gordon. Seeing those big glasses and that bushy mustache makes me think that the guy I've known for so long truly came out of the comics and stepped onto the screen. Oldman could have sat back to just be the straight man, but he makes Gordon real. That's what's so great and so different about Nolan's Batman movies. They feel as real as they could possibly be while still being Batman. I couldn't be happier that Katie Holmes isn't in this. Maggie Gyllenhaal is so much better (and cuter). Sure, that's my personal taste but there it is. And, lest I forget, TWO FACE!!!! This wasn't exactly a well-kept secret or anything, but I was truly giddy when I first saw Two Face on the big screen. Forget about the giggling cartoon that was the Harvey Dent as played by Tommy Lee Jones. Tommy Lee's great in a lot of stuff, but Aaron Eckhart's Two Face is THE Two Face. Tragic, frightening, violent, unhinged, all of it. I was pulling for Harvey even though I knew where he was headed. When he made that turn, Eckhart made me feel it. When he flips that coin, you know there's gonna be trouble.

Top to bottom, left to right, The Dark Knight was great. I know I'll be seeing it a few more times in the theaters and that's high praise since it takes a lot to drag me into theaters anymore. It's just easier to wait a little while to see movies on DVD. I couldn't wait to see Dark Knight, though. I've been waiting for this ever since they turned over that joker card at the end of Batman Begins three years ago and it was worth every second. It's not often that something lives up to this much hype, but The Dark Knight did. I could go on and on about every little thing, but I'll save that for some other post.

I just wish I could line up the cast and crew and give them all a personal thank you. Thanks for bringing Batman back the right way and letting him fly. Everyone connected to this should be proud.
Posted by Marcus at 5:28 PM