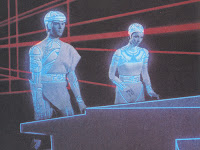 I just read that TRON 2 was announced at Comic Con!!!

The summer of '82, I visited my grandparents and dragged both of my grandmas to see Tron in the theater. Both of them separately, by the way, which was quite a feat considering neither poor woman wanted to see a movie starring people in glowing tights pretending to be in a video game.

After more than twenty years of aching, yearning and defending this movie to those who don't know any better, I finally get a sequel!!!!! Yaaaayyyyyyy!

By the way, the title of this post is supposed to be the Bit saying "yes". It kinda looks like "eyes" about halfway through that. Still.....YAYYYYYYYY!!!!