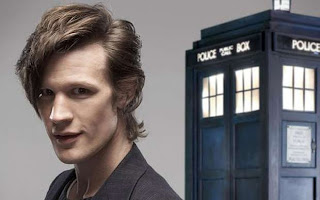 No, I'm not seeking out a new doc to help me through the stress of the upcoming release date. Apparently, this guy in the pic is the new Doctor Who. Of course, fans are up in arms because David Tennant was so popular, so great and oh so dreamy. I can vouch for the first two and my wife never gets sick of talking about the third (especially when he wears his glasses. At least she likes that sort of thing on dudes). Now she, like lots of others, are either not sure about the new guy or they completely hate him. Sure, the guy's head is on the large side and I don't know what the deal is with the hair (Megan just said the Flock of Seagulls thing annoys her), but The Doctor is supposed to be on the quirky side. I think most of the seriously angry and verbal detractors are new to the Doctor Who universe. The Doctor regenerates and changes it up. That's what the show DOES.

Not all of the unhappy ones are newbies. Some just really like Tennant and hate to see him go. I've got to agree with that. Tennant was awesome as The Doctor. I was also upset when Christopher Eccleston left. I thought he was great and was just getting set in his Gallifreyan ways when he regenerated. Then Tennant comes along and nails it. He's been doing well for a while and, for whatever reason, it's time to regenerate. My main concern is that the new guy looks a little too much like David Tennant. I was rooting for maybe a black Doctor or something else that hadn't been done or was nothing like the ones that came before. A woman Doctor? No. If this is supposed to be the same entity regenrating into new shells, I would think it would keep something as basic as gender. If a woman was chosen, however, I think the writers on the show would have given a good explanation and gotten me settled into the idea quickly enough. Plus, that would have really thrown a curve ball to everyone.

That's what this whole thing goes back to: faith in the show's writers. If there's been one constant in the newly updated Who, it's been the excellent writing and story lines. I will forever say that Blink is one of the best written TV eposodes ever and one of the few to pull off time travelling loops and twists with such ease. Unlike most time travel-heavy stories on TV, this one was twisty and turny (The Doctor would approve of such language, you know) and it STILL worked! Simply awesome. These writers, or any other writers entrusted to helm such a beloved franchise, have already proven themselves. I'm sure they didn't pick Matt Smith out of a hat. They wouldn't hand over a series with such a long history to someone they didn't think they could work with. I've watched the series since it was brought to my local PBS in the '80's and have liked some Doctors more than others. Still, there haven't been any, in my opinion, that were AWFUL. They all have their own unique thing going on which makes the show great.

Give the new guy a chance. His name is Matt Smith. Go on and say it. David Tennant will live on in DVD. Also, don't forget the occasional crossovers where past and present Doctors share a few shows. Now, for a very real and very personal gripe. Where's ROMANA???