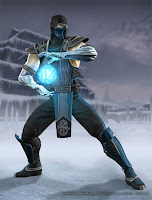 It's pretty cold here in the Midwest. Then again, it's also the middle of January which qualifies as the proverbial dead of winter. It's a really cold time of year. We all know it. That's why the word "dead" is used to describe it. My dad and grandma used to be familiar with the cold, but now they live in Florida so their version of freezing is right around 50 degrees. They called me to check in the other day, one right after another, and both of them asked if I've got heat in my townhouse. I know they're just concerned, but come on guys! Both of them used to live in Chicago, which gets pretty damn chilly right about now. They know life slips and slides along after we're forced to break out the heavy coats. Perhaps the swamp gas got to them or maybe they're just spoiled from living in the Land of Mickey.
I know you're concerned, Dad and Grandma. Thanks for the call. We're doing fine, but we do have modern appliances and heated air blowing out through vents in our floor and ceiling. Heh. Actually, I should keep my trap shut. If I say I'm freezing, my grandma will knit me some slippers or maybe a blanket. There's nothing warmer than slippers knitted by grandma. I still don't know how the hell she gets the size just perfect on those things. Maybe she's some sort of Lithuanian elf.
Posted by Marcus at 12:32 PM