Off the road again...for a little while at least

We're back from the long drive to Florida for Thanksgiving. Even though the trip took 2 days each way instead of one (let's face it, all the airport hassles and flight time pretty much take up a whole day) Megan and I kept thinking how much better it was than flying. We stopped where we wanted, I got to indulge in Jack in the Box tacos not once but TWICE, we brought the dog along, and we had a car when we got to Orlando. The trip was good. We even met up with an aunt and cousin that I haven't seen for WAY too long. Plenty of turkey to go around and all was well.
That is, until we hit Kansas City. Maybe the spirit of that place is getting its revenge on me for what I put it through in Howling Legion. As soon as we got within sight of KC, one of our tires blew. Fortunately, I had just gotten AAA for the trip so that was ok. It set us back a few hours, but no biggie. 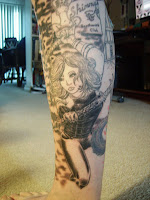 Went through phase 3 of the new tattoo last night. That was fun. Next time I need to eat some real food before sitting for a four hour tattoo session because I was a little light on my feet and green around the gills afterward. Nothing erases the 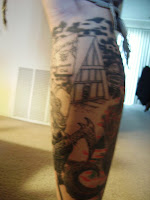 whole, "I'm a badass for getting a tat" mentality quicker than almost keeling over when it's done. Oh well. I just got some pics of Phase 2 so here's a look at how it's coming along. I think Paige is turning out quite nicely.

So now it's back to work. I did get some editing done during the trip but didn't have any time to sit and write. We're off to St. Louis later for next week's signing (Dec. 8 - Borders near Lindbergh and Watson - Be there or be a four-sided shape of some kind) and I'll have to get work done along the way. Brainstorming while on the road is fine, but fresh words need to be typed as well.

I'll get to it. I'll also run to the comic shop because there's 2 shipments for me. The comics I didn't get last week are still there and then there's this week's. Mmmmm. Comics.
Posted by Marcus at 11:13 AM