Xmas fun at Echo Base

When thinking about our decision to stay home this year instead of driving out to St. Louis for Christmas, I am reminded of the words of that knight from the end of Indiana Jones and the Last Crusade. "You chose...wisely."

After our rainy Wednesday, we got frozen, snowed on, dumped with more snow, frozen some more, more snow, frozen and...you get it. Winter storm. The good thing is that I work at home and don't have to go anywhere for days if necessary. No digging out the car or risking my neck. None of that. The bad part is that I work from home and don't need to dig out my car. No reason to call in or take a snow day. Oh well. Skinners 4 is rolling along nicely and I'd rather keep it that way instead of put it on hold until a thaw. 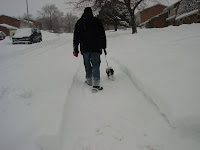 Poor Abby still needs to trek outside to do her doggy thang. The snow was well over her head a while ago, so she must feel like a little white and black dot on big field of...white. That analogy started off better in my head.

Christmas was nice. We had a ham dinner and watched some very non-Christmassy movies. First up: Inglorious Basterds. Awesome Tarantino spectacle with a lot less Nahtzi killin' than I was expecting. Did the Brad Pitt accent come through there? I was thinking it was going to be a solid war-tacular violence fest along the lines of Kill Bill meets The Dirty Dozen. Not that that's a complaint. It was a great movie and when the violence did kick in, it was indeed glorious. I especially liked voice over work from Tarantino staples Samuel L Jackson and Harvey Keitel. Second on the film fest was District 9. This was one of the last summer movies that actually made me want to pay too much for a ticket to get into a crowded and noisy theater, pay way too much for popcorn and see it when it first came out. This has got to be one of the best science fiction movies in a long time. I liked the new Star Trek a lot and this is way up there as well. The effects were supposed to be done on the cheap, but they blended in so well that they didn't even look like effects! Most of you are probably in theaters more often than I am and already saw these, but there's my take.

Back to work. We've got plenty of leftovers to eat and movies to watch. Still haven't really scratched the surface with Dragon Age: Origins or a few other games so I've got those. There's also my pile of comics to catch up on. We rent, so people come around to shovel for us. LET IT SNOW!!!!
Posted by Marcus at 2:12 PM