Day before the end of time 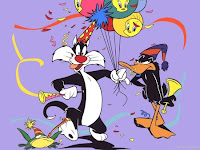 Ok, so the Mayan calendar ends sometime in 2012 and that's supposed to mean the world finally comes to its grand finale. Every calendar in my house comes to an end TODAY!! So that means, in the immortal words of Apollo Creed, "There IS NO TOMORROW!!!!"

Heh. Couldn't resist that. Sorry. If the Mayans couldn't foresee the coming of the Spaniards, then I'll take their more far-reaching prophecies with a grain of salt. And for all of you Mayans out there reading this, no offense meant. I don't believe anyone else's prophecies either.

Like all the other holidays this year, New Year's sort of snuck up on me. I've never been a big party person, so this one never really registered for me anyway. At least I'm not alone. It seems there are two big groups where New Year's Rockin' Eve is concerned. There's the group that goes out to a bar, a fancy dinner or some other occasion that involves dressing up in something other than jeans and t-shirt so they can drink and have fun in a huge mass of like-minded revelers.

Then there's the other group (my group) who cranks it down several notches. In younger days when we had to explain it to people, we would say things like, "There are so many crazies out there. I'm just staying home and kickin' it low key." As you can tell, I haven't had to explain myself in such a manner since sometime in the late 80's or early nineties and even then it was with lame terminology. This group's "kickin'" Usually involves staying home, watching movies and eating snack foods all night long. There are copious amounts of pizza rolls, chips & dips, nachos and other appetizer-esque delights involved and usually a raised glass or two at midnight. For several years, I thought this was a brand of low-key lameness that my parents invented and I grew to appreciate. Then, as I ask around to friends and family, I've found lots of people share this same tradition. One big reason is, let's face it, that first group truly is a bunch of crazies. That's fine, though. Gives us some funny stuff to watch on live TV in between movies.

This year, Megan and I are watching Paranormal Activity. I said during my earlier review that this movie would be much scarier when seen at home. Tonight is Megan's first viewing, so it should be fun. For everyone in both groups, Happy New Year.
Posted by Marcus at 11:13 AM