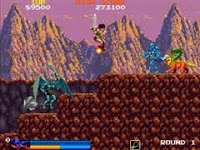 So the other day, I get a hankerin' to play some Rastan. Anyone remember that arcade game from back in the '80's? It's pretty much a Conan sort of thing and I've always liked Conan. Back in high school, my friend and I used to hang out at the local convenience store, sip on Slurpees or whatever and play Rastan before going to class. Awesome game. Only problem is that my copy of Rastan is on a compilation disk for the old Xbox.

Undeterred, I dig out the old black beauty itself and the Xbox works great. Better than the Xbox 360, but I digress. When I turn it on, the Xbox's default date and time is set to 12:00am June 3, 2001. As I'm spinning those years forward, I can't help but imagine my Xbox asking, "What day is it? Where have I been?"
"You've been out of it a long time, Xbox. Brace yourself. It's 2012!!"
Cue the opening music from Buck Rogers.....dates flying past....Xbox spinning and toppling through news clippings of big events....then snazzy vehicles from the current futuristic paradise zip by!! Yeah!!!

Wow, this is loopy. What do you expect? I was up until 5am playing freakin' Rastan!!
Posted by Marcus at 9:18 PM