Wow. Busy, busy! I just got finished with the third draft of Skinners #7 and thought I’d post a little progress update. My progress is…I’ve finished the third draft of Skinners #7. Guess I shouldn't have led with that, huh? Well, it’s coming along nicely. I've even got a title....Skinners Book 7: Forged from Ash. But wait, there's more! Here's a very cool thing for Show & Tell. A sneak peek of the cover!! 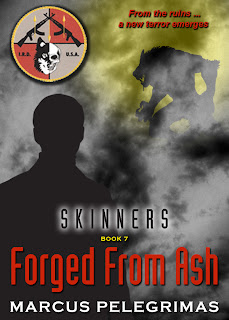 In other news, I’ve entered into a working partnership with Crossroad Press. When I launched into the whole ebook thing, I was very excited. It allows me to write what I want, but I also had to do other stuff like formatting for different services, trying to network with different outlets for marketing / distribution and all that kind of non-writing thing. I thought, “If only someone else could do that stuff so I could just keep writing.” Well, Crossroad Press does that stuff and they seem very capable of doing a great job of it! They’ll be able to put my books into formats that I couldn’t figure out and a few that were simply beyond my reach. There’s a much better chance for trade paperback copies and audiobook versions. Awesome! They also work very quickly. Since there are just a few more hoops to jump through, however, the release of Skinners 7 might have to be pushed back by a month or so. I know you guys are waiting for the book, but this way it gets released in a much better and much more complete fashion than me doing it completely on my own. Thought I’d let you guys know right up front. Trust me, it’ll be worth it.
Posted by Marcus at 4:11 AM