It’s October, which is officially my favorite month of all. I only wish I could put Halloween decorations up, leave them up, and not get those freaked-out looks from neighbors at about the mid-April point. I don’t mind avoiding all that small talk when I go to get my mail, but those Neighborhood Watch patrols camped outside my door get old real quick. Anyway, it’s a great time for movies and I’m pumped to see Quarantine. It seems like I’m one of the few who still admit to liking Blair Witch Project. I KNOW you never see anything, but that’s the point. This one looks like it’s got that whole “in your FACE” camera style but they actually do show you stuff. I still gush about Cloverfield, so maybe I’m just a sucker for the whole shaky-cam thing. I just want to know when that remake of the Wolf Man is supposed to come out. I saw a picture of that werewolf on a magazine cover and it looks pretty damn cool. 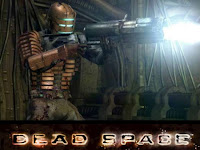 It’s also a good time for video games. One of the horror titles I’m pumped about is Dead Space. Freaky aliens, no-gravity chases, and a system they lovingly call “creative dismemberment” practically demands me to drop some cash. Also, Legendary is out in about a week and a half. I’ve been awaiting this game for a while now and it looks great. Werewolves, Griffins, and all kinds of monsters tearing through modern day cities. Who writes this stuff?? Oh….yeah.

I watched the first episode of Sanctuary on the Sci-Fi Channel. Wasn’t blown away just yet, but it’s got promise. I’ll definitely watch the next few. Fringe is great as usual. I’ve only recently gotten into Supernatural. I didn’t start in on this show for a while because it looked like another “hot young people being snarky on the CW network” show. My agent actually recommended it, so I picked up the first season cheap on DVD. About twenty minutes into the first episode, I felt like a dumb-ass for not watching this show from the start. Very cool premise. VERY cool monsters and yeah, the dudes are dreamy. I’m secure enough in my manliness to admit it.

The only thing I hate about this month is all the stupid ads for every stupid thing that has a play on the word October. “Shock-tober movie fest”, “Rock-tober radio promos”, “Flock-tober all-you-can-eat seagull night”, “Jock-tober NFL giveaways”, “Crock-tober stew meat sales” (I can’t stop) “Mock-tober apple pie”, “Tick-Tock-tober pocket watch booths”, (seriously, I can’t rein this in) “Octo-tober calamari giveaways”. Ok, that one was bad. Broke the rhythm. I need to catch my breath……..
Posted by Marcus at 12:49 PM