Taking a quick peek at the rest of the world

Funny thing about DVRs. Although it's great to have shows to watch whenever you want with the ability to skip commercials, I find myself both in sync and behind everyone else. I hear about a new show like Bob's Burgers and can find it, tape it and watch it right away. Wow! Then there are shows that slip through the cracks for a while and I watch months later to be thrown off by stale ads. Wait a second! New Hell's Kitchen ALREADY?? SWEET!!! Oh, that's an ad from last season. Doh.

I swore I wouldn't watch American Idol after...I don't know...sometime a few years ago. To be honest, I can't even tell you who won the last few seasons I did watch. That useless knowledge gets instantly purged after it passes my eyes. You know...like the emergency number to the police or what my allergies are. Idol has a new season and new judges. Mainly I wanted to see how Steven Tyler would do. Personally, I was a big fan of Simon and loved watching him rip apart people who couldn't sing and have "always been dreaming about this moment". Seriously? ALWAYS? When you were a child, you stayed awake at night daring to dream about standing in line at a hotel and screeching in front of celebrities? Diff'rent strokes. My fear with the new judge lineup was that (since they are performers) they would be extra lenient in letting people get through. From what little I saw (meaning the first episode) I may be right. They really do fall for the sob stories. I'll tell ya, those don't usually work. I've been rejected plenty of times by editors who didn't give a rat's ass about my history. I'm just waiting for the intro to Hollywood Week when Ryan Seacrest says, "Of the 13,000 people who tried out, only 11,437 remain. WHO will be the NEXT American Idol?" 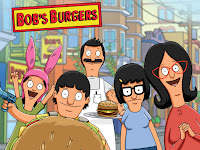 Eh, whatever. I recommend Bob's Burgers and Archer for you animation fans. I still love Fringe with all of my heart. Hawaii Five-O is cool. And then there's The Cape....sigh. Don't get me started on The Cape.
Posted by Marcus at 12:47 PM