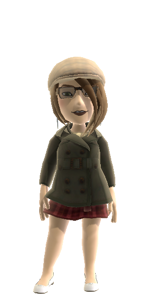 In other cool news, XBox has launched a new update to their dashboard and overall system which allows us to (among other things) create little people that look like us. Sure, they don't HAVE to look like us, but I get a kick out of seeing a little dude who looks like me in games. I don't care how stupid it is, but my Nintendo Mii has done everything from Olympic games to driving go-karts alongside Mario and Donkey Kong and that's pretty sweet. Simple pleasures, right? Anyway, here's my wife Megan's little XBox chick. She doesn't own a hat like that, but that's what wondrous virtual worlds are for. I'm just lucky to have married an actual female who thinks this is somewhat cool. See guys, they're OUT THERE!!!
Posted by Marcus at 1:33 PM