You're damn right it hurt! 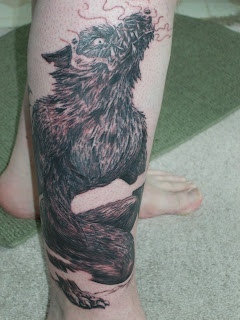 A little while ago, a friend of mine asked about the tattoo I got to commemorate the fact that Skinners is actually seeing the light of day. As soon as I told him I'd email some pics, I remembered that I'd been wanting to put those pics on this blog for some time.

I didn't start out buying into the whole "tattoos for turning points in your life" theory, but it kind of worked out that way. I got my first one (a dinky little skull that looks more like a drawing made by felt tip pen) and was hooked. Since then, I've gotten them when the mood strikes me which happens to be at turning points in my life. More recently, I've been getting them as ways to mark new book series. Needless to say, I've been holding out for the REALLY special one for when I finally sold Skinners. Well, that day came and went and I got a freaking great tattoo done by an amazing artist named Jesse who works at Nuclear Ink here in Omaha. I gave him the manuscript pages for the Blood Blade chapter where Cole was attacked in Canada and he drew up a sketch of the Full Blood in that scene. It's kind of hard to get the whole gist of it because it wraps around a good portion of my leg, but here it is. This is an early picture before all the color was added, but I don't have any complete pics in my computer yet. Let's just say, I love it enough to wear shorts a lot more than I used to during the summer.

Later on, I intend on completing it by wrapping it all the way around with a scene of Cole and possibly Paige coming in for the kill. What can I say? Jesse has a wicked upsell.
Posted by Marcus at 1:19 PM