Picked up Halo Reach yesterday. I'm not a Halo fanatic, but they are undeniably awesome games. Also, I've been sick for a while and thought it would be a nice pick-me-up. Anyway, it's an awesome game and I love the multiplayer, but there are some frustrations that accompany pretty much every multiplayer game for me anymore. Saw this comic at Penny Arcade that sums it up nicely.... 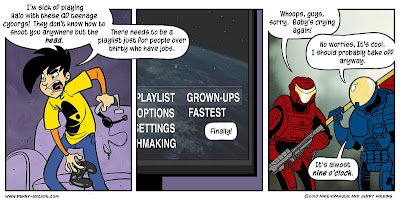 I may love playing games and I may play them a lot, but I sure don't play them as much as I USED to and I sure as hell aren't as good at them as I used to be. Ugh. Whenever I log on to a Modern Warfare or Halo game, I don't expect to win. I just expect to run around and shoot some crap and blow some stuff up. I don't talk strategy. I don't care about kill / death ratios and I'm not in it for glory. Still, it gets awfully frustrating when you're pitted against Terminators who can take me apart before I get a chance to have any fun. If Halo had bots for the multiplayer aspect, it would be perfect. Oh well. I'll still be online.
Posted by Marcus at 1:32 PM