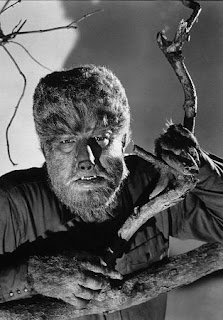 I've just heard that Brett Ratner is in the front running to direct the Wolf Man remake. Actually, I just found out there was going to be a Wolf Man remake. I don't know if I'm liking the sound of this one. On one hand, the new effects could make the new Wolf Man look really cool. On the other hand, the best werewolf of all time was done with real-world physical effects. Of course I'm talking about American Werewolf in London.
Now, AWiL is a COMPLETELY different sort of movie than Wolf Man. I know this. Even for when Wolf Man was made, it still looks pretty cool. It's got an otherworldly quality that all those old Universal monster movies had. Plus, those old flicks have a special place in my heart anyway.
Ok, so it seems I'm pretty much against the idea of a remake.
Now, as far as Ratner is concerned, I don't hate the guy. Get ready to pelt me, but I didn't mind X3. I didn't say I loved it, but it wasn't as bad as I thought it was going to be. I thought Beast looked cool and there were some cool actions scenes. Was it accuarate to the comics? No. HELL NO. It was a fun popcorn movie and I like those. Do I want to see Wolf Man turned into a fun popcorn movie? It already is. Wolf Man doesn't need better effects and will actually lose something by being modernized. I honestly don't think Ratner has the savvy to make this project anything but a waste of time.
So, I guess I'm against Ratner directing.
You wanna know the kicker? Even if this movie is made and Ratner is at the helm decked out in full Ratnericity, I'll still go see it. Actually I'll rent it. How's that? I'm weak, ok?
Posted by Marcus at 12:38 AM