Started watching the Tampa Bay / Chicago game today in regular resolution because I was taping it on the DVR and it takes up less space that way and blahblahblah. Anyway, caught up to the live broadcast, switched over to HD and had what I've decided to call an eye-gasm. I know HD is good, but damn! Going from one to the other like that is jarring! Not only that, but I got to see Tam 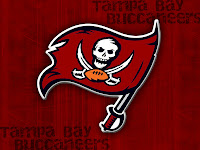 pa pull out a win in OT! Despite the snide comment I make about the Bucs in SKINNERS 1, I am a fan. I watch a lot of different teams mainly because there's no NFL team here in Nebraska. The closest we've got is Kansas City, Chicago and St. Louis. The Chiefs usually do all right (but not so far). The Rams. . .ehhhhh. . .let's not talk about the Rams. Chicago, however always puts on a hell of a defensive show. Why the Bucs? I'd like to say there was some serious research or some sort of childhood tie, but I like the skull and swords on the jersey. No, I'm not blond. When I started watching football a while back, I was deciding what games to watch and I went with the skull instead of throwing a dart at a TV schedule. Also, I played the Bucs a lot on Madden '05 and they always did right by me. So, despite a vaguely BS call in OT where the Bears got slammed for illegal contact when it was obviously of the TB players' fault, it was an awesome game. Ok...there's always some BS calls, so it was just an awesome game. I like to see Tampa win, but hate to see Chicago go out like that.

Wouldn't you know it, right after the game there was some beach volleyball on. FEMALE beach volleyball, no less! Those ladies may not look so great from the front or sides, but from the back it's quite a sight to behold. Not that they're ugly or anything, but there's just no beating those tight little butts wrapped up in those tiny bikini bottoms IN HD.

So that's my Sunday. Too bad Wing Stop doesn't deliver or I'd never have to get up.
Posted by Marcus at 5:09 PM