Enough with the sleigh bells already 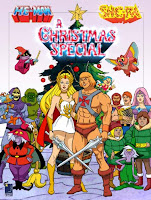 The Great Holiday Expedition of ’08 is finally complete! That’s just a lot of fanfare for two trips taken nearly back to back. The first was the Southern Flight into the Land of Mickey which was already documented here. The most recent was the Overland Excursion to the…uhhh….Kingdom of the….screw it. We drove down to St. Louis to see the family. Sorry, I kind of got caught up there.

The wife and I had a lot of fun. Megan’s sister was very accommodating by putting us up for a few days (thanks Jenny). It was also great to see everyone else and (as always) the food was excellent. We also paid a visit to a branch of my own family tree. Hi Mom & Bob!!! This trip was done in 3 tiers. First, we stayed a few nights in a comped suite at the Ameristar Casino just outside of St. Louis. Very festive, but Santa didn’t see fit to give me the jackpot I asked for. After that, it was a cozy Christmas Eve with a Mom-cooked meal. Then, we made the city rounds to Megan’s relatives. I guess they’re technically my relatives too, since we’re married and all, but you know what I mean. On the gift front, Megan made out like a bandit with clothes and a bracelet and all that. Me? I got some electric slippers! No, that’s not the name of a progressive synth band from the mid-80’s. They’re battery operated slippers that massage your feet. Very cool. And, using some gift cards, I finally picked up a box set containing all the Led Zeppelin CDs. Before now, I’ve had to make do with every album on cassette (for the younger ones out there…cassettes are plastic squares with tape in them that play sounds when placed in a big player. The last one I had was made by Magnorocks. HA! See what I did there? Instead of Magnavox. Like the Flintstones!! Maybe I’m still loopy from all the driving). Anyway, it’s great to hear Zep again without having to delve into an electronics history museum that includes mix tapes I made in high school entitled, “Jus’ the Good Stuff” volumes one through nine.

According to my ticker, there’s less than a month until the release of Skinners #1. I’m still very nervous, but in a good way. Some of our holiday gift cards were for Borders and Barnes & Noble, so we were wandering through the books and picking stuff out. Naturally, I drifted toward the fantasy / horror / sci-fi sections and wondered how the hell my book would keep afloat amid so much competition. Not only is there a lot of other stuff out there, but it’s a lot of great stuff! I guess I’ll just have to wait and see. I’ve already got my first signing lined up (as you can see in the newly-added section above the blog posting). Also, the local newspaper will be reviewing Blood Blade and interviewing me. I’m nervous about that as well, but they’re usually kind to a local boy like me. No matter what, I’m sure my stomach will be in a constant knot until release day. After that, it’ll probably be in several knots.
Posted by Marcus at 12:25 PM