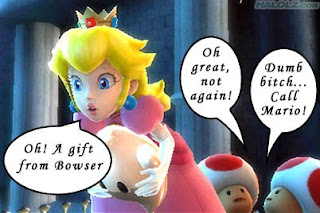 Picked up Super Mario Galaxy 2 and was not disappointed. So far, it's every bit as well made, easy on the eyes and just plain fun as most of the other Mario games. Maybe it's bad for my "horror dude" image, but I don't mind sitting there, grinning like an idiot while living vicariously through a mustachioed plumber riding a little chubby dinosaur. Let's face it, life sucks sometimes. Sometimes, it sucks a LOT and Mario is like a dose of happy mainlined into your arteries. Who wouldn't want to spend some time in the Mushroom Kingdom when times get hard. Then again, I suppose a lot of people spend time there, but rehab usually follows.

I've heard about nursing homes using the Wii for physical therapy, but they should put Super Mario games into mental hospitals to help relieve depression. Keep it away from the folks with hallucinations, though. Seeing talking mushrooms and floors that fall away into nothingness won't do them any favors.

I'm seriously considering getting ModNation Racers for the PS3. Another dose of cute, but in go-kart form. Creating my own tracks and karts looks just easy enough for me to give it a go. Speaking of karts, I haven't stopped playing Mario Kart on the Wii. I've got to say, despite its Mario-cute factor, I spew more obscenities per second during that game than any other. And that includes games where I get shot, stabbed, or otherwise worked over by an unrelenting and unforgiving AI with superior processing power behind it. Getting tea bagged by some dickhead 11 year-old on XBox Live? It happens. Getting dicked over by a stuck-up blond princess throwing a blue mushroom at me when the finish line is in sight? That's tough. Hearing her honk, yell and wave at me as she drives by to steal my victory for the 5th race in a row?? That mother f*%$ing little bi&$h has gotta PAY!!!!!!
Posted by Marcus at 11:55 AM