OK, so the new Indiana Jones wasn't so great. That doesn't mean I'm giving up on summer movies. On the contrary, I've always thought this new Hulk looked pretty cool and I still do. After seeing Iron Man and knowing that Marvel is taking the reins with the green guy as well, I think it'll be quite a show! And it's not like I'm asking for much here. All I want is to see a giant angry monster smash the living hell out of everything. I know, that's a real stretch coming from me, but it's true. Liv Tyler may not be wearing those sexy pointy ears and talking elvish, but she's always pretty hot. So far, my wife is sending me out on my own to see this one. Maybe Indy broke her spirit, but she never really was a Hulk fan. That's surprising, because she is pretty scary when she gets angry. (I had to say something like that somewhere in here) 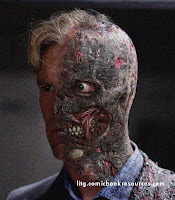 All I can say about this pic is oh HELL YESSS!!!!!
Two Face has always been a favorite and this looks really great. I don't know how much of him will actually be in The Dark Knight, but I can not WAIT!!! Of course Joker looks amazing, but this is just...yeah.
Posted by Marcus at 3:49 PM