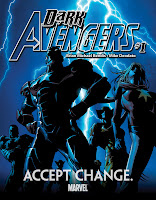 So my comic book addiction is back in full swing. And just in time for Marvel's big summer event: Dark Reign. You name it, there's a Dark title. Dark Hawkeye, Dark Wolverine, Dark Darkhawk. Maybe that last one cancels itself out. I normally don't go for these big event crossovers because they're built to suck the money right out of geeks like me. The completionists. I read Dark Avengers because I'm an Avengers fan already. Holy MOLEY! It's superheroes actually using their powers without any checks or balances. Sure, Hawkeye is really Bullseye and Spider-Man is really Venom, but they are whipping ASS and they're being led by ex-Green Goblin Normon Osborne! You got someone causing trouble in a major way? Send in the fast / strong guy to rip their damn head off. Someone else giving you grief? Let Hawkeye shoot them through the eyeball. What makes this great is that they're working it into the proper Marvel Universe instead of it being one gigantic "What if?" thing. And I truly, sincerely hope it doesn't turn into a big "What if?" thing.

As of a few minutes ago, I finished reading Dark X-Men #1. Since my comic reawakening, I've been steering clear of the X titles simply because there's SO much going on that I've missed. I want to try to get into it, but X books are like Lays potato chips. You can't eat (read) just one. I made an exception for Dark X-Men and I'm glad I did. Normie is putting together a team to police mutants and he's using Namor to spearhead it. As soon as I read the part with Dark Beast, I was in love. Between all the kick-ass darkness and last week's Captain America Reborn, I am one happy Marvelite.
Posted by Marcus at 3:10 AM