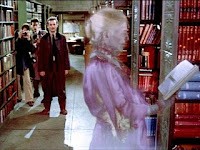 Only a week and a half until I go on another ghost hunt! This time, it's to a site that some of you may have heard about: Villisca, IA. There were some well-documented axe murders here and it's supposed to be a pretty active spot entity-wise. We're hoping there are still some spirits hanging around that would like to tell us all about it. The Nevermore bunch and I will be there, recorders in hand, doing our best to stir up some supernatural activity. After all the editing I've been doing, a little road trip along with some poking around in the dark will be just what I need. Sure, it may not be the same as what most folks would think about when I mention poking around in the dark, but it'll be a lot of fun. If we uncover any evidence, I'll be sure to let you know.

Another upcoming event that's in the works is an author panel at a local comic book shop. Not only that, but it's the shop I go to on a weekly basis. It's still in the planning stages, but that's another fun one I'd like to do. Hopefully I can say something constructive in the midst of being distracted by so many comic books, Star Wars collectibles and cool t-shirts.

That's about it for now. God of War 3 looms on the horizon. Skinners 3 arrives in stores next month. Good things are afoot!

PS - Another landmark occasion: This marks the first time I've used the word "afoot" on this blog. History in the making, folks.
Posted by Marcus at 3:21 PM