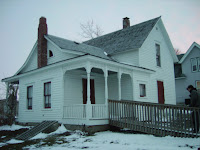 Man, did we shoot a lot of video at Villisca! The Nevermore folks and I sifted through a large chunk of DVR footage, but didn't find much of anything. Sometimes I'm surprised I don't make something move just through the sheer force of my own will while staring at a chair or stack of books on that screen. Nothing paranormal on the pictures I took, but I did find a few cool EVPs. There was some distant singing in the child's room and scratching sounds on the equipment itself. Since it was too damn cold for any of us to be singing, that raises my eyebrow. Still plenty to go through and I will report on anything else we find. Check out this picture from the cellar. I think the last scene from The Blair Witch Project was shot down there. 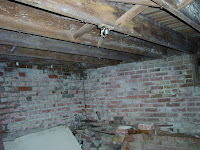 Other than that, it was a pretty easy weekend. I've been playing through God of War 3. That game still kicks ass. Finally completed Batman: Arkham Asylum. I haven't been able to play that as often as I like, plus I've been purposely taking my time so I didn't get through it too quickly. When something's good enough, you wanna savor it. Heh.

So now it's time to dive head-first into Skinners 5. Book 3 comes out next month and 4 should be out at the end of October. It'll be a wild ride. Be sure to get your copies and tell your friends to get their own. I'm setting up convention appearances, so keep an eye on that to get those books signed! Talk to you later.
Posted by Marcus at 1:00 PM