Awesomeness in the guise of research

I generally like my job. Sometimes it’s frustrating. Other times it’s a blessing. Most of the times, it’s a bunch of waiting. Every so often, however, I get to do something truly amazing in the name of research. One of those times happened this past weekend when I joined a paranormal investigation team on an actual ghost hunt.

I’d met the folks at Nevermore Paranormal some time ago at a local convention and asked them if I could pick their brains so I could flesh out the MEG guys a bit more. Although MEG is just sort of there on the other end of a phone in Book 1, they play a bigger role in the future and I wanted to make them more than just a close guess of what I thought ghost hunters were. I’ve seen plenty on TV and read a lot in books, but I jumped at a chance to talk to the real deal.

And, some time later, I got to go with them to investigate the Squirrel Cage Jail in Council Bluffs, Iowa. I was happy to just go along and see an investigation in person. More than that, I got 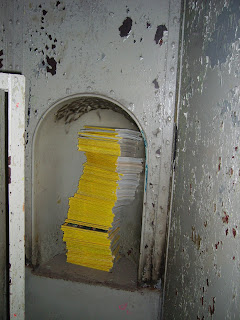 to hold a K2 meter and wave it around until the lights flickered at spikes in the magnetic field. It’s a lot more exciting than it sounds. I participated in EVP sessions, staked out a cellar in total darkness, took pictures of abandoned jail cells and tried to contact the Other Side. Pretty much an awesome way to spend a Friday night! It was even cool debunking some things that first seemed like major evidence. Although I didn’t get to hear any disembodied voices or see anything move or glow, I did have a few weird moments that aren’t so easily explained. (Surely, no HUMAN BEING would stack books like this) There were times that the electromagnetic fields seemed to fluctuate at just the right time in response to some questions we asked in one particular cell. Again, it was much cooler at the time.

Anyway, my thanks to everyone at Nevermore Paranormal. I did my best to contain myself and hopefully didn’t step on any toes. All of the MEG guys (and gals) are better for your efforts. You’ll just have to trust me on that for now because the next Skinners won’t be out for a while. Waiting…..now you’re in MY world!
Posted by Marcus at 1:35 AM