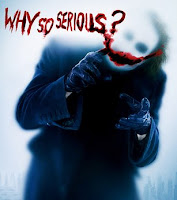 I was perusing some earlier blog posts, seeing what kind of BS I'm forcing through my keyboard, looking at how many "writing" tags I have as opposed to "video games", when something occurred to me. I'm writing a whole lot of stupid, unnecessary crap on this blog. Should I use this space to come up with something like...I don't know....a new invention of some kind or some sort of concrete evidence that proves the coexistence of alternate realities?


After I took a few minutes to think about what other, more important, stuff could be written here I realized THAT would be the bullshit. The truth of the matter is that nobody's thought process is bullshit-free. Maybe some of the more brilliant people have bullshit-lite brains and ALL of us have a few granules of enlightenment floating around in there, but it's mostly bullshit.

Then there's the possibility that I'm just the dummy who doesn't realize his brain isn't up to speed. Maybe I'm imbalanced in just the right way so my little section of the universe feels steady while everything else wobbles around me. That could very well be the case. If that's true, it doesn't even matter because I'd still rather just sit here coloring on my walls and singing to myself like the guy in the institution who is cracked, but doesn't bother anyone.

Eh, too much thinking. How about that Hell's Kitchen?
Posted by Marcus at 12:30 PM